Kin naming dreams, either in individual threads or grouped together.
Post Reply
22 posts

The third fall of snow in the winter of his second year is heavy and thick. His fur stands out sharply against stark white, and his tribemates don't bother bringing him along on hunts where stealth is a necessity. He gathers, and does not complain, because as long as he is useful he eats. He eats more mosses than meat, but it is food.

He is pulling sticks from a stunted tree in the southwestern valley when he hears the voices. A hunting party, arguing; about what, he can't tell, but the dispute is growing heated, their voices rising, beginning to echo off the rock faces. He looks up, spots the group where they stand beneath a bluff. Far above them hangs a curling wave of wind-sculpted snow. Even as he watches, a scatter of clumps flakes from the crest and blows away in the wind.

Calling out would be unwise. He simply drops his burden and moves towards them as quickly as he can without floundering and falling. As he reaches them, they go briefly quiet, startled into silence by his sudden interruption. "Softly!" he hisses, and tosses his head, pointing with his muzzle at the precarious ridge of snow overhead. "Your argument is not worth your lives!"

They pick their way out into the open and away with silent caution. As the group reaches the pass, a low sound alerts them; they turn back to watch the collapse, the cascading avalanche that would have buried them alive had they stayed longer or shouted it down onto their heads.
Last edited by Prolixity on Mon Aug 09, 2021 8:37 pm, edited 1 time in total. word count: 277
Top

When he was barely an adult yet, another young Totoma decided she liked him. She spent time selecting and laying out the best of the spring flowers for him to enjoy. He did enjoy them .... he ate them all.
Last edited by Prolixity on Mon Aug 09, 2021 8:38 pm, edited 1 time in total. word count: 53
Top

As he grew up, the herd noticed his tendencies to be lazy and to lie in the best patch of sunlight he could find whenever he could. Sometimes he was compared to a sunning lizard. After a while, his habit had everyone calling him Basks-in-the-Sun.

Look up. Look up
and you will see them. All the stars
of winter, stretched across the sky,
as though you could step from star to star,
daintily, one hoof at a time.
Often they glimmer alone. Other times
they have company --
among the stars gleam colors, shifting slowly,
a sky-wide procession of strange lights.
word count: 69
Top

Touched by sun, snow melts
atop the cliff, water running down
in rivulets, dripping
into the mouth of the cave.
From the stony rim
grow five icicles.
word count: 40
Top 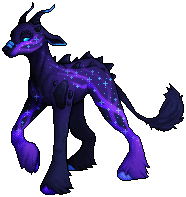 (Out Past The Stars)

Climb up from the ground,
step up on the air,
walk towards the sun,
up where the birds go.
Walk through the day,
up and up and up,
a long way, a long walk.
Night will steal in before you are done.
Walk up into the dark --
here you can unfurl wings of light,
take flight, climb into the sky,
take your path on and on and on,
out past the stars.
word count: 76
Top
Post Reply
22 posts